In the golden month of October when osmanthus is blooming, the celebration of 110th anniversary of Xiangya Nursing Education of Central South University (CSU) and the 8th Xiangya Nursing International Academic Conference was held in Hunan Hotel from October 23 to 24, 2021. The themes of the conference were inheritance, innovation and leadership. The conference was broadcast live online during the same period. Around 300 national and international leaders, experts, scholars, clinical nurses and nursing students gathered together through the Internet cloud to jointly celebrate the 110thanniversary of Xiangya Nursing Education.

The conference started with a grand opening ceremony on October 23, 2021. The leaders attending the opening ceremony were He Xiuming, Deputy Secretary of Party Group, Deputy Director and First-class Inspector of the Department of Science and Technology of Hunan Province, Tao Lijian, Executive Deputy Secretary of CSU, Chen Lizhang, Member of the Standing Committee of the Party Committee and Vice President of CSU and Ma Yueru, Member of the Standing Committee of the Party committee and head of the Organization Department of CSU. Leaders of relevant administrative departments of CSU, of the four affiliated hospitals of CSU and of the six medicine-related schools of CSU also attended the opening ceremony. Representatives of the veteran comrades of the Xiangya School of Nursing attended the opening ceremony as well: Leng Xiaohong, former Party General Branch Secretary, He Guoping, former Dean, and Wu Ailin, former Party General Branch Secretary of Xiangya School of Nursing. We also specially invited Mr. John Frisbie, President of Yale-China Association and Professor Ann Kurth, Dean of the Yale School of Nursing to virtually attend the opening ceremony. 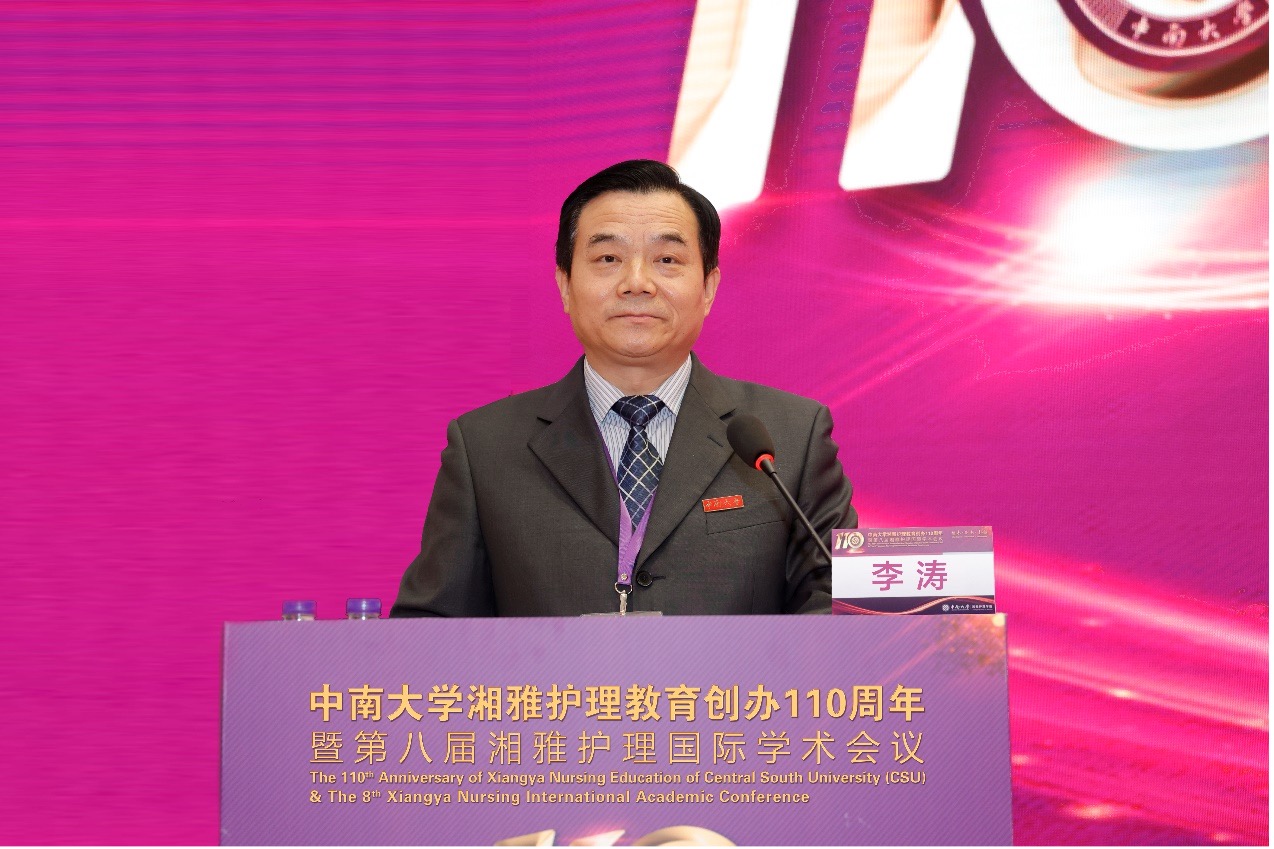 First, Professor Tang Siyuan, Dean of Xiangya School of Nursing of CSU, delivered a speech at the opening ceremony. He expressed his sincere thanks to all the leaders and guests who have been caring for and supporting the construction and development of the school, sent his heartfelt gratitude to all the teachers and clinical nursing colleagues who have worked hard in the front line of teaching, scientific research and management, and gave warm greetings to all the alumni who have shared concerns on the development of Xiangya School of Nursing. He pointed out: retrieving the marks of the past, the people of Xiangya never forgot our initial resolutions, and with our mission always in our minds, we continued to expand the connotations of nursing in our time, achieving excellence in talent training, discipline development, serving society and international exchanges. Looking forward to the future of nursing, Xiangya Nursing will further strengthen discipline construction, improve the quality of education, provide talent support for the construction of a modern socialist country, so as to contribute more to the development of a powerful modern China in 2050 and the health of mankind. 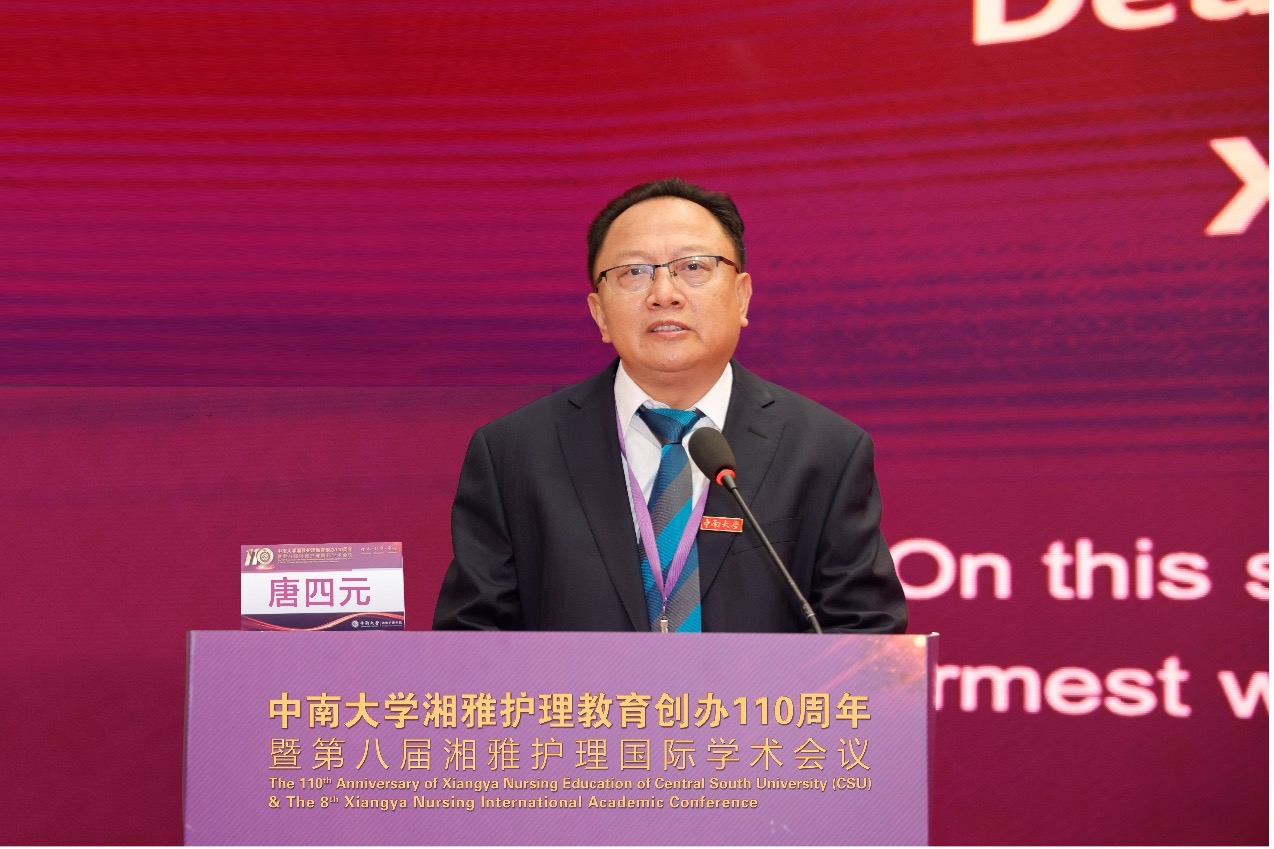 Later, Professor Wu Xinjuan, Chairperson of the Chinese Nursing Association and Deputy Dean of School of Nursing, Peking Union Medical College, expressed her best wishes to Xiangya Nursing Education. She mentioned that during the Covid-19 pandemic, nurses who fought on the front line, saved the dying and healed the wounded without fear of their own life and death and with a great sense of righteousness, have won the praise of people across the country. After a hundred years of history, the reputation of “South Xiangya” has become well-known both in China and globally. And the development of Xiangya Nursing has also served as a microcosm of the nursing development in China, leaving a strong stroke in the scroll of Chinese nursing. She hoped that this conference would be able to demonstrate the new concepts and pursuits of nursing education, convey the new heights, new dimensions, new standards and new contributions of nursing development to nursing colleagues all over the country, and become an important symbol to comprehensively improve the training quality of nursing talents and after all help build a healthy China. 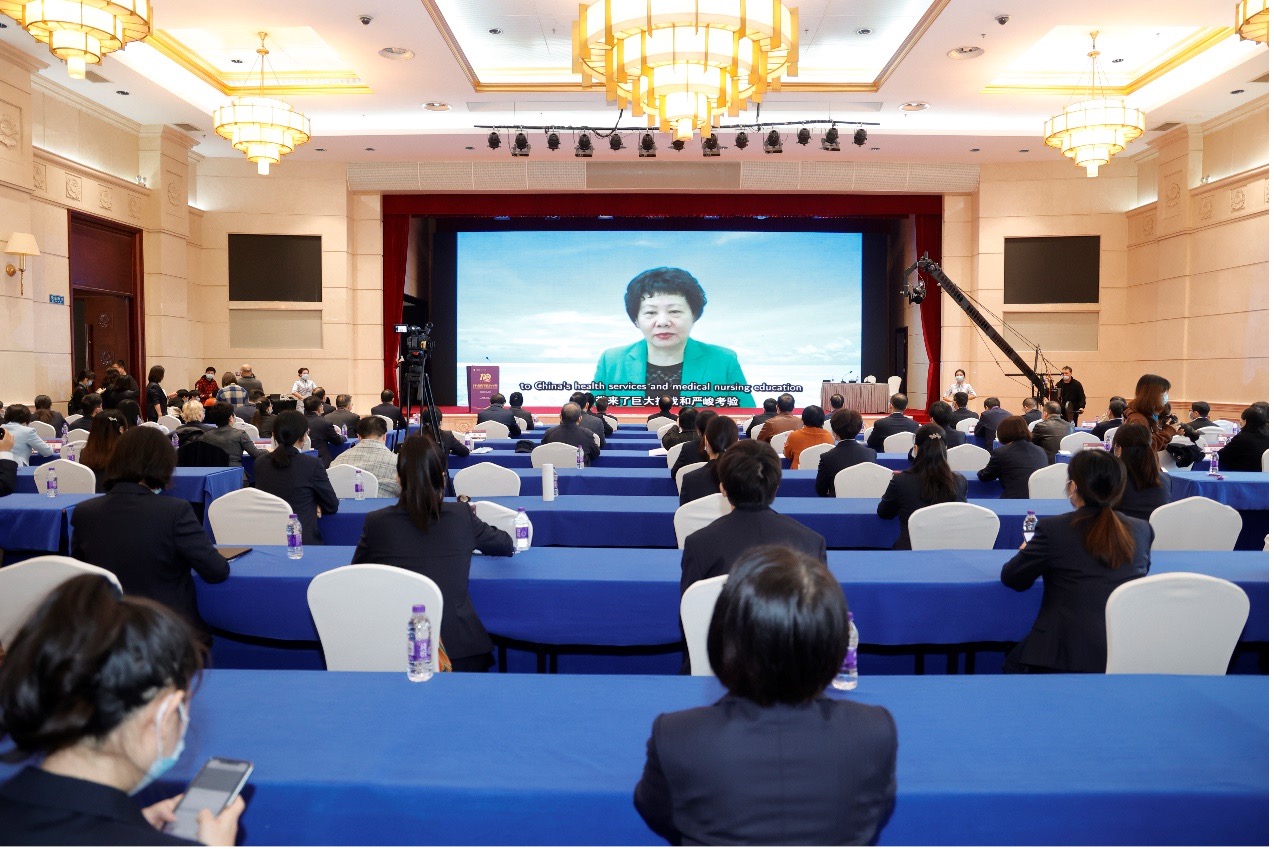 Next, Professor Shang Shaomei, Chairperson of Advisory Committee on Nursing Teaching, Ministry of Education first affirmed in her speech the great contributions of Xiangya Nursing in cultivating nursing talents and developing nursing disciplines in China. She pointed out that after a hundred years of vicissitudes, fruitful achievements have been obtained by the people of Xiangya Nursing who have always been pioneering, innovative and striving for progress. As one of the first two doctoral degree authorization sites for nursing majors in China, Xiangya School of Nursing has played an exemplary and leading role in the construction of nursing disciplines. Finally, she wished Xiangya School of Nursing to continue to make efforts in bringing more brilliant outcomes, and join hands with the national nursing disciplines for a prosperous future.

Mr. John Frisbie, President of Yale-China Association, firstly expressed his warm congratulations on the 110th anniversary of Xiangya Nursing Education in his speech. He noted that Xiangya School of Nursing is an internationally renowned, leading nursing school in China and a long-term partner of Yale-China Association. As an old friend, Yale-China is proud of the great achievements of Xiangya Nursing. In retrospect, Yale-China Association and Xiangya have always worked closely together to improve the medical and health service of Hunan province and the whole country through various programs like the Chia Family Health Fellowship, with tangible results produced. He spoke highly of the dedication of Xiangya nursing faculty in the fight against Covid-19, and expressed his gratitude to them for sharing their experience with Yale counterparts. He believed that after more than a century of ups and downs, the partnership between the two parties will thrive and become even more stable. 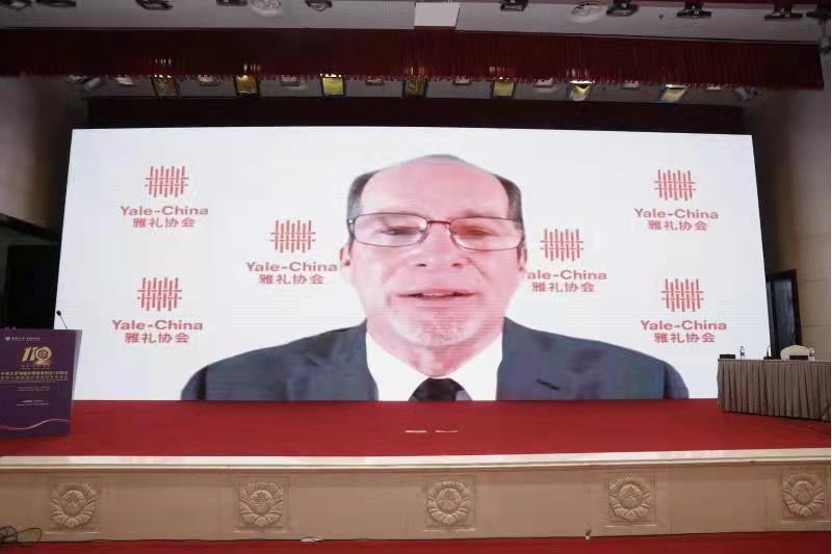 Professor Ann kurth, Dean of the Yale School of Nursing, emphasized in her speech that Xiangya School of Nursing of CSU and Yale University School of Nursing, both enjoying a time-honored history, have played a pioneering and witnessing role in nursing education in their respective countries. The two nursing schools share many research areas in common, including HIV/AIDS, community health, mental health, and response to population aging. In the years of exchanges and cooperation, mutual learning, progress and growth have been achieved on both sides. She called on the two schools to innovate in talent training models, encouraged nurses to play a greater leadership role in crises such as global infectious diseases and global warming, and build a more sustainable health system to meet new challenges to human health in the future. In conclusion, she wished the academic celebration a complete success. 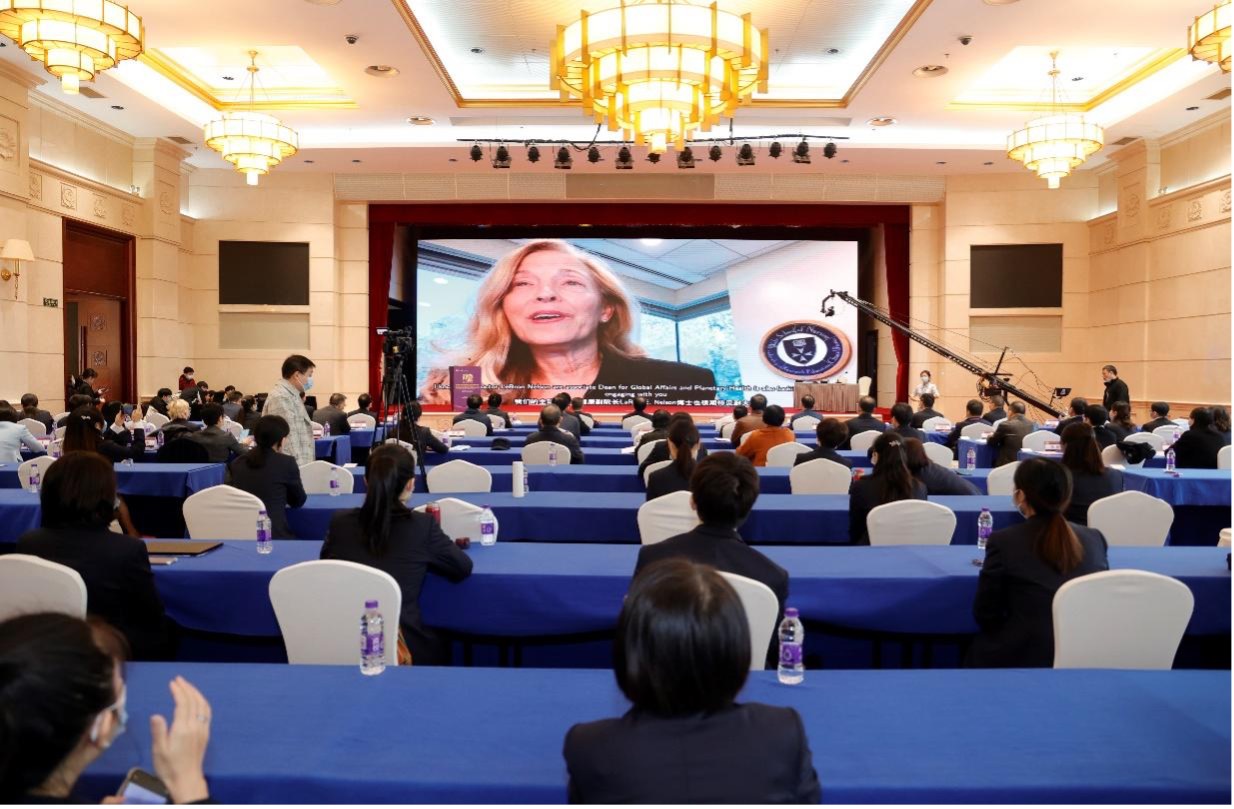 Address by Professor Ann Kurth, Dean of the Yale School of Nursing

He Xiuming, Deputy Director of Hunan Science and Technology Department pointed out in his speech that CSU, bearing in mind General Secretary Xi Jinping’ s instructions, has trained medical nursing talents, integrated itself into the development of Hunan province, and concentrated on solving key frontier problems. He highly appreciated the positive contributions of Xiangya Nursing in safeguarding people’s health and building a healthy Hunan. He highly praised Xiangya nursing faculty in Hunan, saying that they, rushing to the front line, have fulfilled their responsibilities and made indelible contributions in winning the battle of epidemic prevention and control. He hoped that Xiangya School of Nursing, following the spirit of General Secretary Xi Jinping’s important speech, will remain true to its original aspiration of building a world-class discipline, and strive to solve the bottleneck problems in the field of nursing. He expected Xiangya School of Nursing, by inheriting the innovative gene of Hunan culture, will continue to put forward new theories, open up new fields, explore new paths, and climb up to the scientific peaks bravely, so as to promote Human health and well-being. 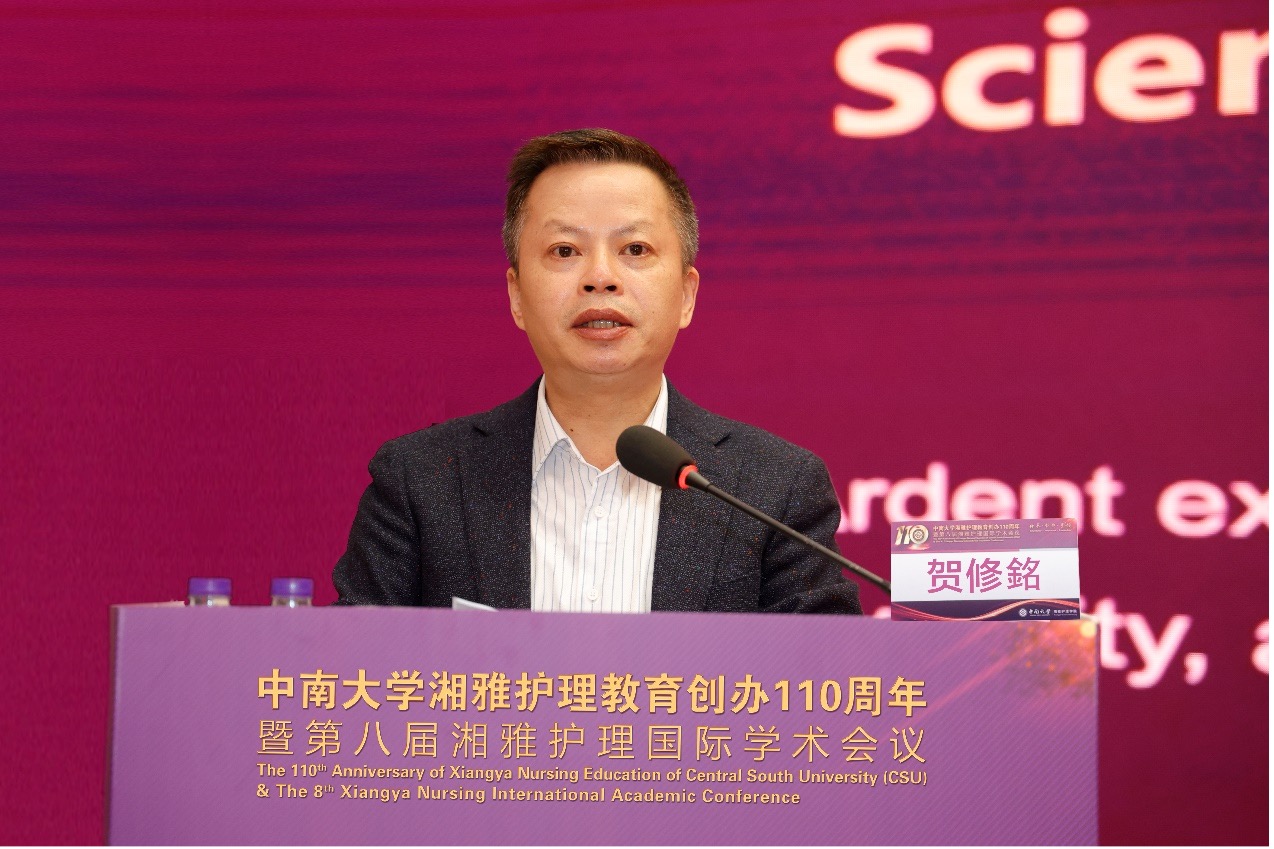 Address by He Xiuming, Deputy Director of Hunan Science and Technology Department

Professor Tao Lijian, Executive Deputy Secretary of CSU, on behalf of the university, spoke highly of the brilliant achievements of Xiangya School of Nursing in talents training, discipline construction, scientific research, social services, cultural inheritance and innovation, as well as the striving and pioneering spirit of Xiangya nursing faculty. Fully affirming the school’s contribution to the high quality and rapid development of the university, he indicated that Xiangya nursing education, as a leading and advantageous discipline in China, has trained excellent talents for China’s medical and health service in the past and provided important support for the “Double First Class” construction of CSU. In the future, Xiangya nursing discipline construction and school development will still be an important part of the university to build a world-class one. Finally, he stressed that Xiangya Nursing needs more efforts to achieve new leapfrog development at the historical intersection of the “two centuries”. He hoped that Xiangya School of Nursing can stand firmly in the new era, have a global vision, grasp the opportunities of nursing development, and improve the level of discipline construction and the quality of talent training through continuous efforts. 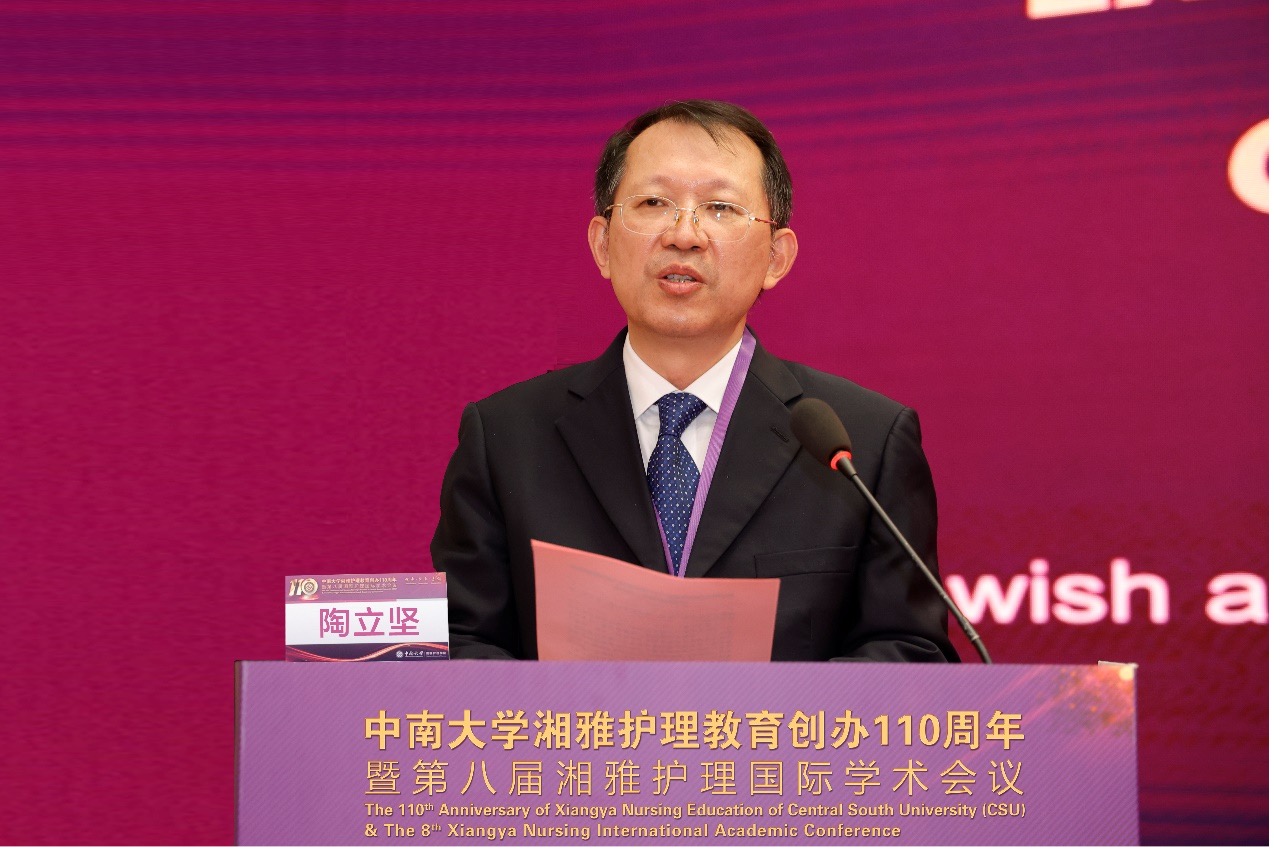 After the opening ceremony, a group photo with all the leaders and guests present was taken in witnessing the 110thanniversary of Xiangya Nursing Education.